Pick One Word for the New Year, Not a Resolution 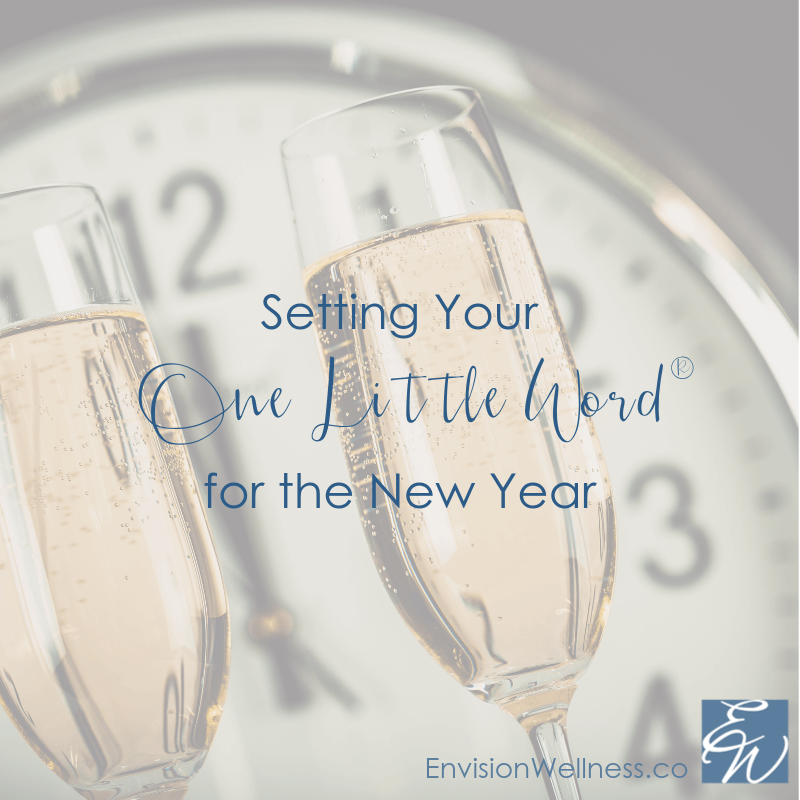 If your life involves a lot of internet time, you may have heard of the “picking your word” sensation that’s rapidly gained in popularity over the past several years. If you’re interested in finding out more about it, then a little research will reveal how many people find that it’s more than just hype.

The idea behind picking your word for the new year is to give yourself a more helpful concept to orient yourself toward than a New Year’s resolution. Many people who have tried the “one-word” system find themselves far more content with their growth for the year than they were when they tried resolutions.

So what exactly does it mean to “pick your word”? The first thing you should know is that there is no pre-selected list of words that you’re “supposed” to choose from, no boundaries to what your word might be. It’s entirely up to you. It should, however, be something broad enough to apply to a wide variety of situations you’ll face but specific enough that it pertains to something you struggle with.

For example, several years ago I started noticing I was all over the place in my life. Starting my business left me frazzled, always busy putting out fires. In short, I had a lot of ideas written on margins and half-started projects. Wanting to feel the satisfaction of following through on something, I made FOCUS my word of the year.

I won’t say that picking that word by itself was a magic spell that solved all my problems; I also did a lot of emotional labor in other ways, including writing about my feelings on a regular basis and discussing them with a trusted support system. But my word was the first thing that popped into my head when I was presented with opportunities throughout the year. When I had the option to apply for a presenter slot at a conference in my field, I asked myself, “Does this fit with my FOCUS?”. And I was able to make a decision that aligned with goals without spreading myself too thin.  I would never say I don’t still struggle with following through, but choosing my word helped me get into the habit of overcoming those feelings more often than I indulge them.

So why should you choose a one-word intention for 2019?

Picking your word orients you toward growth rather than self-hatred.

With a typical resolution, you think about what you don’t like about yourself, and make the resolution accordingly. With a word for the year, though, you’re focusing on what you want to become. It’s aspirational rather than disciplinary. It feels like an opportunity instead of a punishment.

Picking your word doesn’t build in an automatic way to fail.

When you have a resolution like “lose 20 pounds,” then if you haven’t lost any weight by the end of January, you feel like a failure, so you get discouraged and give up. Your word, though, doesn’t include any such automatic way to fail. Embodying your word is a process, and even if you have an opportunity to use your word and don’t, you can rest assured that there will always be another opportunity around the corner.

Picking your word gives you a simple, clear focus.

A single word is an easy and immediate thing you can call to mind with hardly any effort. And with a whole year to work on it, you have the possibility of seeing really satisfying progress. If you really commit to it, then by the end of the year your word will likely be a natural way of living that you don’t have to keep consciously thinking about.

Picking your word sets you up for lasting change rather than temporary change.

If you have a resolution, like “lose 20 pounds,” you might lose the weight by cutting out a food group or two, but gain it all back when you start to miss those foods. If you have a word like SELF-CONTROL, though, then by the end of the year you’ll have cultivated a whole healthier attitude toward eating (and lots of other things!).

When it comes to picking your word, you don’t need to overthink it; some words may prove more effective for you than others, but it would be hard to imagine a scenario in which you picked a word that was just downright wrong. However, if you’re not used to thinking reflectively about yourself, then you might find it helpful to get some assistance in picking your word. You could try this website dedicated to the idea of living by one word, where you’ll see several example words and lots of people’s stories about how picking their word helped them, or this blog written by a woman who’s practiced living with one word a year for several years now and has made some helpful charts/worksheets for first-timers.

If you want to increase your chances of ending 2018 proud of the growth you’ve achieved, consider choosing your word this New Year.

If you’re interested in talking more about what you can do to see growth in the new year, you can call us at (305) 501-0133 or click here to schedule a free 20-minute Clarity Consult .

WANT SOME HELP GETTING STARTED?

Pop your email below and get a list of ideas for your word for the new year.

Sticking To Your New Schedule or Routine
Scroll to top