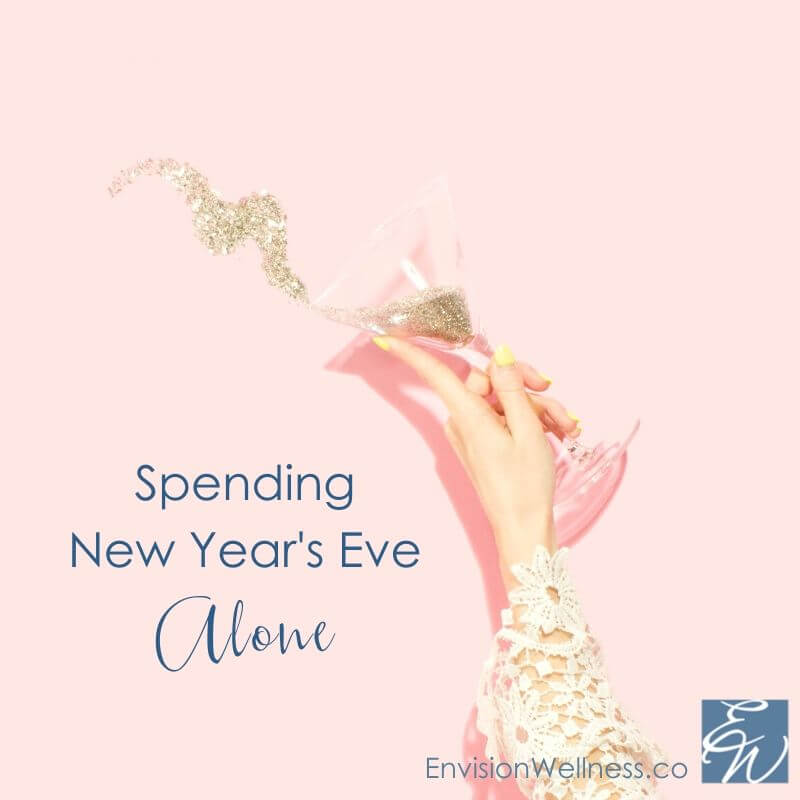 If you’re single, Christmas and New Year’s Eve can both be challenging for your self-esteem and mood. Both carry the possibility of (sometimes) well-meaning family members who just “can’t figure out” why you’re still single, hangouts with friends who are paired off, and news of engagements popping up left and right.

But New Year’s Eve does have that extra little twist of the knife: the well-known tradition of the midnight kiss. The only options, it can feel, are to stay home and think about all the people who are out with their S.O., or to go out to a party and see all those people right in front of you. Remember, though, that the way you think of New Year’s Eve can blow the night completely out of proportion or put it into its proper perspective.

For starters, remember that this one night is not symbolic of your entire life and your entire future.

We attach a crazy amount of significance to New Year’s Eve in both romantic and non-romantic ways, expecting it to be a life-changing turnaround for us or supposing that it’s emblematic of how we’re doing in life in general. The fact is, a new year can be a great time to start a positive new habit or routine, but not because of any inherent special quality that the day has in itself; it’s only special if you make it special. This can work in your favor both ways: If you want to decide to start something new on New Year’s, go for it! Use it as the special kick you need to get going! But on the other hand, when it comes to your singleness, remember that December 31 and January 1 aren’t actually any different than April 19 or August 2. You probably didn’t spiral into an existential crisis about your singleness on those days, so why should you at the new year? The fact that you’re single on that day doesn’t carry anymore or less meaning than it does any other day; it’s not a sign that you’re going to be single for all of the time or even for the rest of that year. It’s just the reality of that day, the same as it is any other day.

If you have friends who are single as well, consider getting together to make a fun night of it.

If you’re like me, then you have a group of friends who are mixed – some single and some married/in relationships. You might feel odd about excluding those in a relationship for a singles-only night out, but keep in mind that it’s just one night. Keep in mind, also, that it’s not as if they’re going to be sitting at home alone crying if you go out just with your single friends. That’s the whole point – they’ll have their S.Os.  Think about how much fun you could have just forgetting about the romantic implications of the night and spending it away from people who you might love but who will just remind you of your singleness when you don’t want to be reminded of it.

If you’re not in the mood to go out, then consider planning a day that reminds you of all of the great parts of being single.

It’s not hard to do this: basically just throw together a day of all the things you like to do and enjoy doing them without any compromise, discussion, or argument. Wanna watch a guilty pleasure movie? No one’s stopping you! Make that weird casserole full of holiday leftovers that no one except you thinks is good? Go for it! Drive across state lines to see that tourist attraction that’s on your bucket list? No time like the present! The best part about being single is the freedom to enjoy what you want to enjoy, so plan a New Year’s Eve that reminds you of just how great that really is.

Finally, if you’re lucky enough to live near family that you get along with, considering spending New Year’s Eve with them.

Sometimes New Year’s Eve isn’t treated as a typical family-gathering holiday because of its associations with staying up late and drinking, but plenty of people treat it as an extension of Christmas and have a great time with their families. Your parents, aunts, uncles, and siblings may not host a wild party, but you can still have a great time staying up playing board games or chatting over leftover Christmas cookies. If you’re with people who make you feel loved, then you’ll have a good time. Of course, not everyone is blessed with a family who makes them feel this way, so family time isn’t a guaranteed good idea for every single person but can be one alternative to parties that you don’t think you’re going to enjoy at all.

But then again, there’s always the possibility that you are rocking the single life, that being around paired off partygoers don’t bother you in the least because you love being single and hope to stay that way. If so, congratulations! For you, New Year’s Eve will be just a tiny blip in your already self-assured life. If you’re one of the many single people who haven’t quite arrived at that state of confidence yet, though, then remember that you have options when the countdown rolls around this year. The holidays can bring up enough pain without adding depressive thoughts about your singleness into the mix, so take every step you can to avoid falling into that trap.

Want to talk more about coping with holiday loneliness or struggling with loneliness year-round? You can call us at (305) 501-0133 or click here to schedule a free 20-minute Clarity Consult .

How to Deal with Holiday Blues

Picking One Word Intention for the New Year
Scroll to top