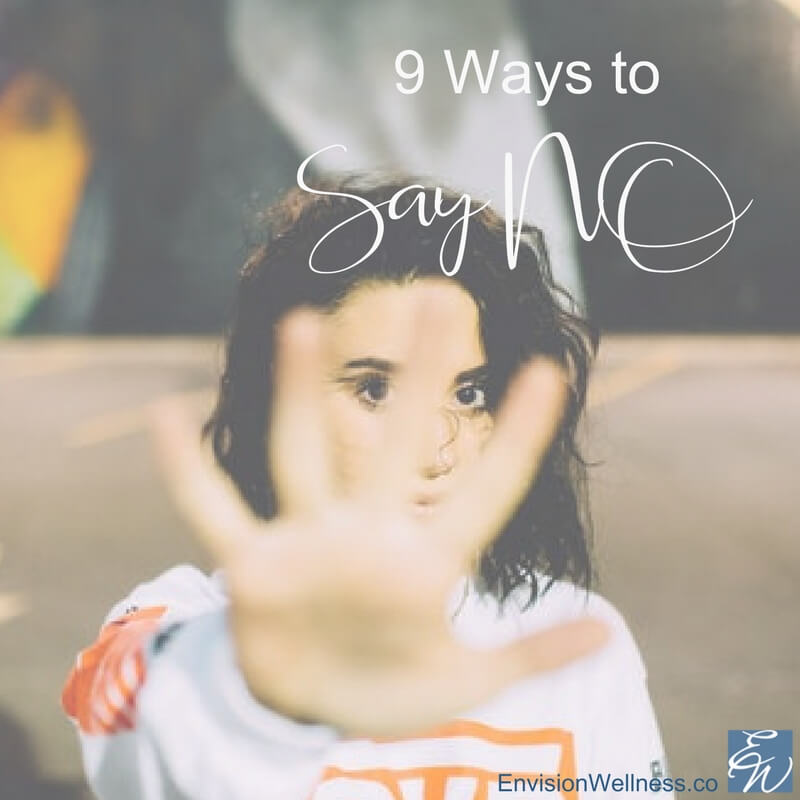 “Just say no!”
Remember seeing these three little words plastered all over billboards, t-shirts, buttons, and TV commercials during the “War on Drugs” in the 80s-90s? If you were ever a kid sitting in a school assembly while an adult told you to “just say no” to drugs or alcohol, then you might remember wondering, “Yea…but is that actually going to work?”

As adults, we often worry the same exact thing when it comes to saying no to anything – a friend’s request to borrow your car, a boss’s request to pick up another project, a fundraiser’s request for “a small donation.” For most people, just saying no seems like an impossibly difficult feat. Some of us squirm uncomfortably, trying to figure out just the right way to phrase it, while others just never get the hang of it and wind up saying yes to everything, at the expense of our mental health.

But as hard as saying no can be, we all have to do it sometimes if we want to practice self-care and not become so overburdened with responsibilities that we’re no good to anyone around us. So if you’re a habitual struggler when it comes to saying no, try picking up some of these strategies!

1. “I don’t have time to work on that now, but would you ask me again in three months?”
If you actually wish you could say yes to the person who’s asking you for a time commitment, then, if their need is an ongoing one, propose an alternate timeline in which you’d be able to help. This lets the person know that you value the thing they’re asking about and want to be involved. But use caution with this one – only use it if you actually mean it!

2. “Right now I’m working on x, y, and z, but is this something that you’d like me to prioritize above those projects?”
This is a great one and a classic one to use with a boss. Depending on where you work, your boss might genuinely not know what you’ve already got on your plate. By making a statement like this followed by the priorities question, you let your boss know what you’ve got going and you turn the issue back on her so that she has to make a call about what you prioritize and what you don’t. That way, you don’t have to worry about negative repercussions for letting some tasks wait until later.

3. “Let me check my calendar and get back to you when I have a firm answer.”
This tactic works well with someone who’s not taking “no” for an answer in a face-to-face or phone conversation. It gets you out of the conversation without committing either way and then once you’ve “checked your calendar” you can reply with a firm no over some form of written communication so the asker can’t keep trying to work around your no.

4. “I’m sorry, I can’t do that, but I can ________.”
Another good strategy for when someone’s asking you to do something that you’d actually like to do, this no is so gentle and well-intentioned that your good feelings toward the favor itself are sure to be obvious. Offer an alternative way to help. It could be a smaller dollar amount, an activity you’re better at or know more about, a smaller time commitment … but whatever you choose, this no conveys your good will toward the asker.

5. “I’m sorry, I can’t do that, but I know just the person who could help you…”
Again, be careful with this one: try to avoid recommending somebody who also wouldn’t want to help! But imagine, for instance, a scenario where someone is looking for a speaker for a certain event. Maybe you don’t have time to devote to that right now, but you know a colleague who’s been trying to build up their public speaking background. Offering your colleague as an alternative is a win-win-win; the asker still gets a speaker, the colleague gets more experience, and you don’t have to over-commit yourself.

6. “I’m sorry, but I never get in the middle of fights between friends.”
If you want to reduce the possibility that someone will take your “no” very personally, then try to phrase your no as if it’s just a policy that you have in general, not a “no” that’s about this specific situation.

7. “I’m sorry, I’m just not going to be able to do that at this time.”
If you know you’re dealing with a persistent asker, sometimes it’s best to be vague. If you don’t offer specific excuses, then the asker has nothing to work with to try to get you to change your mind.

8. “I’m sorry, but I said that I couldn’t do that and I’m not going to change my mind. I would appreciate it if you would stop asking me.”
This one can work well in a lot of scenarios where you’re being pressured, but maybe most of all with salespeople that you don’t have a relationship with. They’re paid to keep pushing and to break down your excuses, so stating flatly that you’re not going to change your mind is a good way to end the conversation.

9. “I’m sorry, but no.”
This one is for when you’ve graduated to the pros of saying no, when you’ve mastered the art so well that you finally feel like you don’t need to mask what you’re doing or let someone down easy; you’re allowed to say no to things and still be a good friend, family member, or employee.

Now that you’re ready to get out there and flex your self-care, “no”-saying muscles, just remember: don’t get so good at saying no that you start saying it to opportunities that would be great for you. Everything in moderation!

We hope that you’ll share this article with someone that you know that’s struggling with unhealthy or idealistic relationships.  You can call us at (305) 501-0133 or click here to schedule a free 20-minute Clarity Consult to learn more about how we can help you improve your love and dating mindset.

Psychological Impact of Debt on Millennials