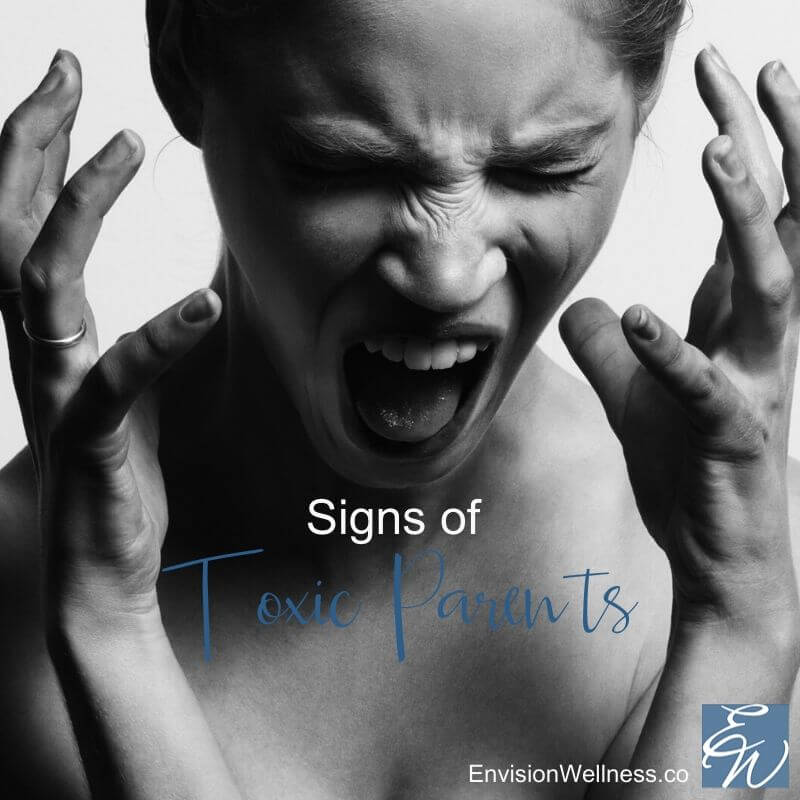 Toxic parents are easy to spot sometimes. These are the ones who are physically, sexually, or verbally abusive. Most children (whether young or adults) can identify them as obviously harmful to their development. But some forms of emotional toxicity are much harder to see. In fact, that’s one of the things that can make toxic parents who are more subtle all the more harmful: children often don’t even realize that they’ve been subjected to it.

In her classic book on the topic, Dr. Susan Forward discusses several different types of toxic parents: inadequate parents, controllers, alcoholics, verbal abusers, physical abusers, and sexual abusers. This list is not exhaustive, though, and neither is this list of possible signs that you might be in a toxic parent-child relationship.

As you read through the signs below that you might be in a toxic relationship with one or both parents, remember that the key is to ask yourself whether your parent(s) shows any of these behaviors as a pattern rather than to try to see if you and your parent(s) show all 8 signs. This list isn’t meant to be like a magazine quiz.

#1: You find yourself making excuses for anyone who mistreats you.

You might think that it would make more sense if #1 said, “You find yourself making excuses for your parents when they mistreat you.” But if you do this habitually with anyone who mistreats you, there’s a very good chance it’s a learned behavior that you started in relationship to a parent at a young age. Our parents are usually the people we have to rely on most in the world, so it’s too emotionally distressing for us to imagine at a young age that they’re unfit to raise us. Therefore, we turn the blame inward and suspect that any of their shortcomings or problems are our fault. If done regularly enough, then this kind of thinking can become a pattern that you might extend to significant others, co-workers, and friends.

If you were in this situation as a child, there’s a good chance you didn’t necessarily realize that anything was unusual or damaging about your family dynamic until later in life; your situation was all you knew and therefore it seemed normal to you. But this reversal of roles is a sure sign of a parent who isn’t able to nurture and protect their child.

#3: You found out some things about life sooner than you should have.

This sign goes along with #2: parents who aren’t ready for parenthood often have a hard time realizing when they’re exposing their children to too much too soon. This can take a variety of forms: addictions like drugs or alcohol, romantic relationships, financial problems, etc. In some cases, your parent may not have merely slipped up and accidentally allowed you to see these parts of their lives, but deliberately made you a confidant about these problems. While a child might seem like a comforting, non-judgmental person to take such problems to, relying on children to bear these emotional burdens is an act of selfishness and is more than a young person is equipped to handle.

#4: Your toxic parents’ feelings are more important than your feelings.

When talking about peer-to-peer relationships, mental health experts often mention how important it is to make sure that you’re looking after your own emotional health. But the parent-to-child relationship is different. While parents should not ignore their own emotional health, it is their job to prioritize their child’s well-being. A parent who’s so tied up in their own feelings that they can’t attend to yours is not fulfilling their duty as a parent.

#5: They’re not the best at respecting boundaries.

Do they drop in whenever they want to? Call whenever they want to? Pry into areas of your life that you’ve indicated you don’t want to discuss or debate? This kind of behavior can look like love – “They just want to be part of my life,” you might think to yourself – but there’s a difference between showing love respectfully and acting intrusively.

#6: Toxic parents try to control you by holding things over your head.

For instance, if they know that you’re still financially reliant on them to some extent, they might threaten to withhold money if you don’t do as they say when it comes to important life choices. Sometimes the manipulation might be more subtle, though, and take the form of piling on guilt or of withholding love.

#7: There was (at least) one member of your family that got scapegoated.

Of course, it’s always possible that there was one member of your family that legitimately made more harmful life choices than the rest. But one tactic of toxic parents can be to project their own insecurities and issues onto one child, as Gerald Schoenewolf, Ph.D., explains in this Psych Central article. As a child, it might be hard to realize that your parents are inaccurately characterizing you or a sibling this way, but you might begin to see this more clearly in adulthood.

We’ve all probably been guilty of this passive aggressive move at some point in our lives, but when a parent does it habitually, children can internalize their words as criticism just as much as if the parent was saying them straightforwardly. Toxic parents sometimes do this about sensitive subjects like physical appearance or career choice when they want to display disapproval without looking like an outright “bad guy.”

Growing up with a toxic parent can have lasting psychological effects, but the good news is that it’s not too late to develop a new, healthier relationship, even if your childhood is long past, if your parent shows any willingness to change. This is where therapy can step in and help you work toward healing! Even if your parent is unwilling to take such a step, though, remember that toxic parenting often just gets passed on from generation to generation, so probably the best thing you can do is break the cycle and take steps – whether that involves professional therapy or not – to make sure that you don’t replicate your parents’ behavior if you have children of your own.

If you’re interested in talking more about toxic parents in your own life and what you can do to heal from their effects, you can reach us at (305) 501-0133 or click here to schedule a free 20-minute Clarity Consult.

Psychological Impact of Debt on Millennials
Scroll to top